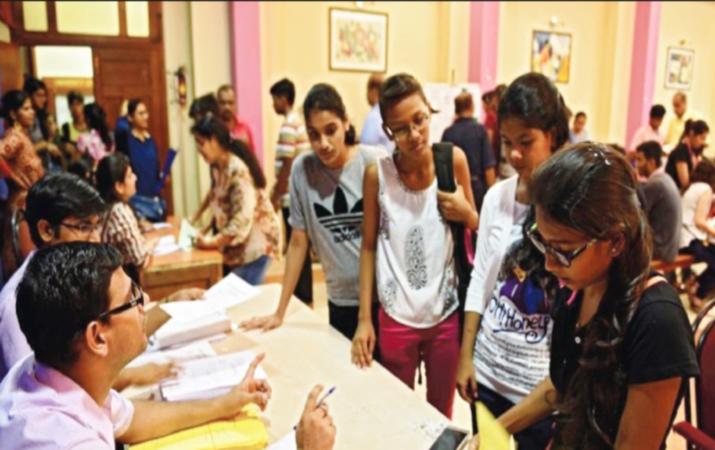 While most popular courses in sought-after colleges were closed for admissions in the first two lists,BA (Hons) in English, BCom, BCom(Hons), BSc Chemistry (Hons), BSc Physics (Hons) and BSc Mathematics(Hons) are still available in most colleges. The cut-offs mostly remain above 90% for the unreserved category.

In Ramjas College, for instance, while honours programmes in political science, Sanskrit,and zoology are closed, the college has dropped the cut off by 0.33 and 0.50% points in BSc Physics (Hons) and BSc Mathematics (Hons) respectively. Thecut-off for BSc Chemistry (Hons) remained 95%,same as the second cut-off. The college has also released revised cut-offs for BA Economics (Hons),BA(Hons) in English , BA History (Hons), and BA Hindi (Hons) which witnessed a marginal drop.

Kirori Mal College (KMC) released the third cut-off list with an upper and lower limit for all subjects. For instance, candidates wishing to pursue BA(Hons) in English would need to score “96% and above but below 96.5% marks in aggregate”.

Explaining the reason behind the cut-off range set by the college, Sunil Singh, admissions convener at KMC,said,“The college was following the provisions laid down by the Delhi University. If students, who were eligible as per the secondcut-off list,want to take admission under the third list,they will be entertained only on the last day of admission under the third cut-off list, subject to the availability of vacant seats,” he said.

Dean of Students’ Welfare Rajeev Gupta said the students who had the required percentage would always be eligible. “Their admission will, however, be on the basis of availability of seats. For instance, students who had secured the required percentage for a particular subject under first cut-off can apply for admission in any DU college but the college will grant them admission only if seats are available.”

In Kamala Nehru College admissions are open in BA Economics (Hons), English, Hindi, Sanskrit and journalism. The college has also reopened admissions in political science after closing it in the second list.

Students who wish to study BCom in Shri Ram College of Commerce still have a chance as the college has released a third cut-off list for the course with the cut-off for unreserved category seeing a marginal drop of 0.25 percentage point. For students from ST,Kashmiri Migrants,and Persons with Disability category, the cut-off ranges between 86.75-87.75% witnessing a drop between 0.25-1 percentage points.

The Internationalisation of Indian Higher Education

The Benefits of Learning Management Systems