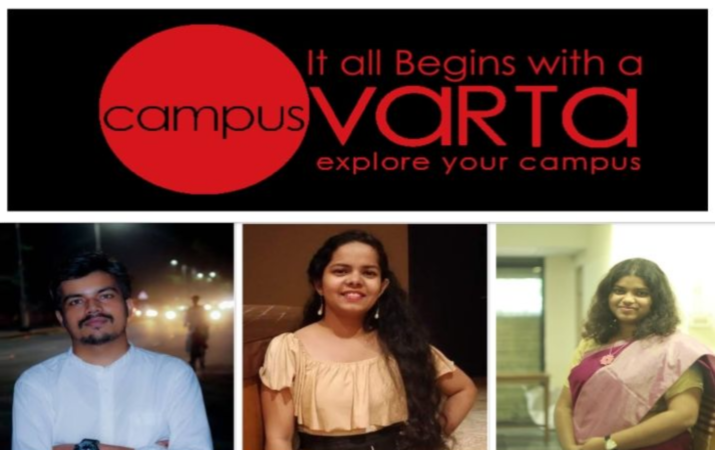 CAMPUS VARTA, an ed-tech platform based in Bihar that brings together rural schools, colleges, and universities

India is a heap of opportunities. Still a lot of youngsters are confused and unaware about the courses and  institutions around them. Students in metros don’t have to think twice while researching higher studies. A few hours online, and they know plenty. But youngsters in Rural India often wonder about the opportunities and options open to them.

Campus Varta, India’s first EdTech media  that connect rural schools, colleges and universities on a digital  platform, is for sure carries out the role of a window to campuses.

Campus Varta is the first and only startup from Bihar which is nominated for Forbes 30 Under-30 Asia Class of 2019 as a Semi- Finalist in top 500 by Forbes Asia.

Campus Varta was founded by a college dropout Rajan Mistry in 2017. In 2018, he was joined by Subhechya  Sarkar as COO,Gunjan Kumar as CPO, Komal Gupta as Vice President, Md. Amanullah as CTO and Namita Priya as founding member.

“We are addressing the problem of lack of campus news in rural India. Rural schools, colleges, and universities don’t have any digital presence. Many students in these areas miss their final exams due to lack of awareness and information in real time. They are also unable to explore startup events, e-cells, and workshops,” says Ranjan Mistry, Founder and CEO, Campus Varta.

“We believe that innovation can be found in the root level of the country. According to government report  approx 68% population of India lives in Rural region. Despite that literacy rate in Bihar is lowest in whole India. Since the late 1970s, Bihar has lagged far behind other Indian states in terms of social and economic development. It can be considered as a state with lowest development. Therefore Bihar works as the biggest platform, at the same time.

The students from rural areas are unaware of the educational opportunities due to lack of digital knowledge.  Therefore, the aim of Campus Varta is to reach ground level institutes and connect them to a global platform where they can get more information about events, happenings, research and opportunities for them “ said Komal Gupta, Vice President of Campus Varta.

Another challenge for them was the lack of awareness about the digital world among the teachers and students. Campus Varta provided one/ two day training programme on the basis of the internet to resolve this problem.

“Recently, We entered in Bollywood for first time by partnering with Mobius Films for Jhalki ,movie released on 14th november 2019, as Rural Outreach partner and are responsible for screening of this movie in different  schools of Rural India to inspire and aware students about child labour and traffiking which is the key issue addressed in the movie. Movie is supported by Noble laureate Kailash Satyarthi. After watching the trailer we immediately connected with the story and Ranjan excitedly dropped an email to Mobius Film to partner with them in any way possible because we work at the ground level and connect with it. And we got positive response from them and became Rural outreach partner for Jhalki. ” Said Namita Priya, Founding Member.

Campus Varta have reached approx. 3.5 Million people directly and indirectly, mostly penetrating the rural India by offline and then convert it into online mode. They have reached approx. 54+ Universities, 3000+ Villages, 1800+ Colleges and 1000+ Schools and have monthly active user around 40K.

The startup has partnered with institutes like IIT-Kharagpur, IIT- BHU, ISM Dhanbad, BITS Pilani, IIMs, and with Bihar-based colleges like IIT-Patna and IIM- Bodhgaya. The team includes 10 core members apart from the co-founders, and has 100 ambassadors from various colleges and universities.

Campus Varta earns revenue through paid advertisements, events, paid projects, and commissions. “We are  coming with various platforms and features for students in our application especially based on Artificial Intelligence & Machine Learning, and also in around 10 vernecular languages which helps a lot the students who resides in rural areas from different states.  ” Said Md. Amanullah, CTO.

14 university colleges to come under government

CIC order:UGC directs all universities to provide copies of answer sheet only at a cost of Rs 2 per page

Profession opportunities in Literature? Words to your protect