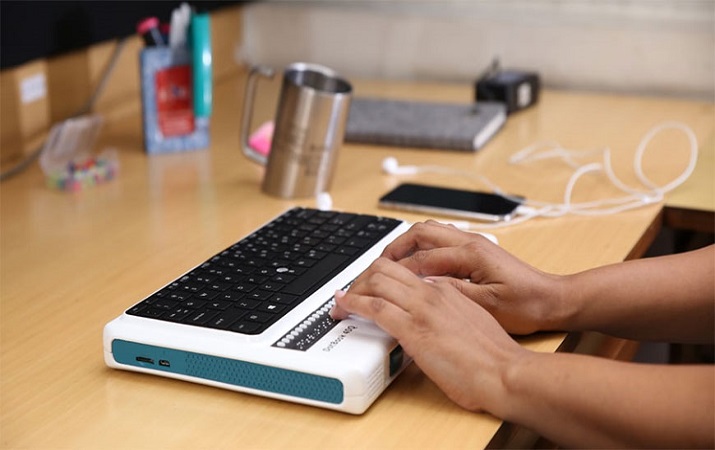 Instead of a screen, the laptop displays embossed text in Braille through a touchpad. It is created by IIT-Delhi researchers who opted out of their placements to work on the idea which developed into a product five years later.

The alumnus and researchers at the Indian Institute of Technology (IIT), Delhi have created a laptop for visually-impaired. In what they claim to be a first in the country, the laptop has an interface in form of dots or Braile instead of a visual one. The researchers have named it ‘DotBook’.

Pulkit Sapra, 26, from Delhi and Suman Muralikrishnan, 27, from Chennai — both students of IIT-Delhi did not opt for a job and continued researching on the topic which after five years was launched as India’s first laptop for visually-impaired. The duo launched two versions of the laptop, one with 20 cell version and another 40 cell version — each referring to the number of characters displayed in one line.

Instead of a screen, the laptop displays embossed text in Braille through a touchpad. Users get to feel everything a website has by touching the pad. Putting in maximum information in one line and yet making it user-friendly was the most difficult part for the researchers.

Talking to indianexpress.com, he said, “The idea was conceived by our seniors 7-8 years ago. When I joined the college, five years back, we started working on it as a project but as it started developing, it made us all the more intrigued into it. We started interacting with people and started to work on an interface which can share maximum information and in a user-friendly way.”

“It took us five years to develop an interface, which was the most difficult part. How to create ‘bold’ in Braille, how to mark read or unread emails in dotted form. Such were the challenges and we worked closely with the community to get constant feedback. The

was tested multiple times and even after the launch, we will make it go through rigorous testing. It can be available in the market within a few months,” he said.

Sapra was a student of BTech Mechanical and Muralikrishnan studied MS (Research) from IIT-Delhi. They worked in collaboration with KritiKal Solutions, Pheonix Medical Systems

The laptop comes with 4 GB internal storage and is expandable up to 64 GB. It is built in Linux. The 20-Cell Braille Variant has Perkins Keys while the 40-Cell Braille Variant with QWERTY keyboard. The 40 cell version costs Rs 60,000 and the 20 cell version comes at a price of Rs 40,000. The laptop can be connected with mobile phones and other laptops to provide a visual display for sighted persons.

Aiming at social and digital inclusion for the visually impaired, the team, said that variants of DotBook are available in the international market but they cost around $25,000 and the indigenously created product is much cheaper. The institute would also be disbursing some free laptops to underprivileged students.