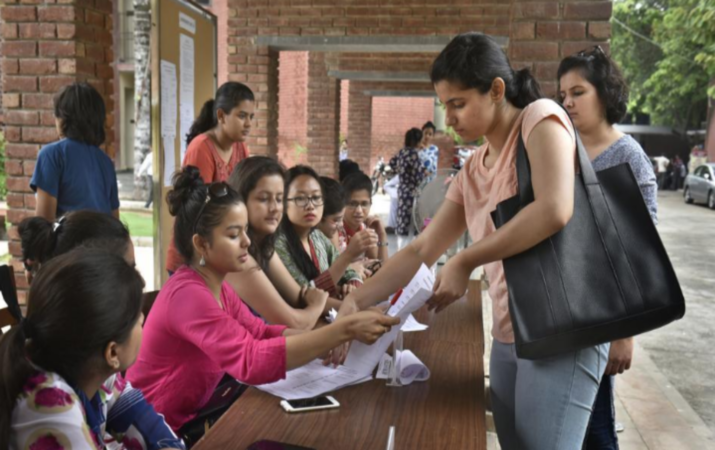 The revised admission criteria for Undergraduate (UG) admission in affiliated colleges notices has been released by Delhi University. After uproar from student community and a court order, DU has made some changes in the admission criteria for Bachelor of Arts (BA) Economics and Bachelor of Commerce (B.Com) Honours courses.As per the new notice, the university removed the criteria of including Mathematics compulsorily as one of the subjects in best of four subjects (BFS) for admission in BA Economics (Hons).

The DU notice said newly-published criteria are based on the 2018-19 eligibility criteria and "replace the corresponding information in the Bulletin of Information for Undergraduate Admissions 2019-20 published earlier".

According to the criteria published last month, B.Com (Hons) required a student to have passed Mathematics/Business Mathematics with an aggregate of 45 per cent marks as a mandatory requirement, and now that rule has also been changed.

The registration process for DU's degree courses will be concluded on June 22.

The Delhi High Court on last Friday directed DU and the University Grants Commission (UGC) to allow students to apply for admission to UG courses at the varsity for the current academic session based on the eligibility criteria of 2018-19.

The petitioners claimed that change in the eligibility criteria of various courses, including B.Com (Hons) and BA (Hons) in Economics, was illegal and violative of Article 14 of the Constitution as it was done arbitrarily, without any prior notice.

They have sought quashing of the criteria which included mathematics compulsorily as one of the subjects in best of four subjects (BFS) for admission in BA (Hons) in Economics from the academic year 2019-20 as per the ''Bulletin of Information'' circulated on May 29 for admission to UG courses.

Alternatively, the petitions have sought a direction to the authorities to implement the eligibility criteria followed by the university in the past three consecutive years and to make the new norms applicable from the next academic session.

Till last year, if a student had 50 per cent in Mathematics, he or she could apply for BA (Hons) in Economics, but the subject was made mandatory for ''Best of Four'' in the initial notification, which meant Mathematics has to be part of the top four subjects, aggregate of which will be considered for admission, the pleas have said.

This year, the criteria have been tweaked mandating that a student should have 50 per cent or more marks in Mathematics/Business Mathematics and an aggregate of 60 per cent with number of new conditionalities attached, the petitions have also said.