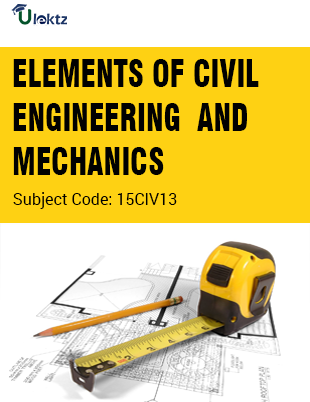 Elements of Civil Engineering and Mechanics

1.3 Roads: Classification of Roads and their functions, Comparison of Flexible and Rigid Pavements (Advantages and Limitations)

1.5 Dams: Different types of Dams based on Material, Structural behavior and functionality with simple sketches.

1.6 Introduction to Engineering Mechanics:Basic idealizations - Particle, Continuum and Rigid body; Newton's laws of Force and its characteristics, types of forces-Gravity, Lateral and its distribution on surfaces, Classification of force systems, Principle of physical independence, superposition, transmissibility of forces, Introduction to SI units

3.2 Application-Support Reaction in beams Types of Loads and Supports

Module 4 Centroids and Moments of Inertia of Engineering Sections:

4.1 Centroids -Introduction to the concept, centroid of line and area, centroid of basic geometrical figures, computing centroid for– T, L, I, Z and full/quadrant circular sections and their built up sections. Numerical problems.