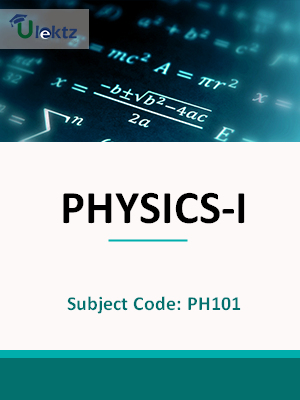 MODULE - I IMPORTANCE OF MECHANICS IN ENGINEERING

1.1 Importance of Mechanics in engineering; Introduction to Statics;Concept of Particle and Rigid Body

1.2 Types of forces: collinear, concurrent, parallel, concentrated, distributed;Vector and scalar quantities; Force is a vector;Transmissibility of a force (sliding vector)

1.4 Representation of forces in terms of i,j,k, Cross product and Dot product and their applications.

2.1 Concept and Equilibrium of forces in two dimensions,Free body concept and diagram,Equations of equilibrium.

2.2 Concept of Friction, Laws of Coulomb friction, Angle of Repose,Coefficient of friction

3.1 Distributed Force: Centroid and Centre of Gravity;Centroids of a triangle, circular sector, quadralateral, composite areas consisting of above figures.

4.1 Introduction to Dynamics: Kinematics and Kinetics,Newton’s laws of motion,Law of gravitation & acceleration due to gravity, Rectilinear motion of particles

4.2 Determination of position, velocity and acceleration under uniform and non-uniformly accelerated rectilinear motion; construction of x-t, v-t and a-t graphs.