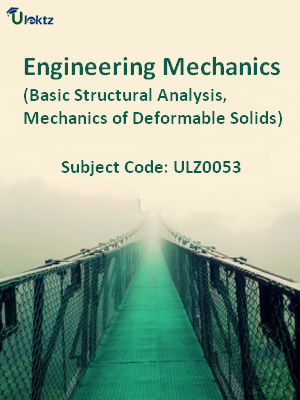 1.5 Couple, Vector representation, Resolution of a force into a force and a couple.

Unit 3 Centroid and Moment of Inertia

3.1 Center of Gravity, Center of Mass and Centroid of curves, areas, volumes,

3.2 Determination of centroid by integration, Centroid of composite bodies.

3.3 Definition of Moment of inertia of area, Perpendicular axis theorem and Polar moment of Inertia,

3.5 Moment of Inertia of masses, Parallel axis theorem for mass moment of inertia,

4.6 Work and Energy, Kinetic energy, Principle of work and energy

5.4 Theory of Torsion, Torque and twist, Shear stress due to torsion circular sections