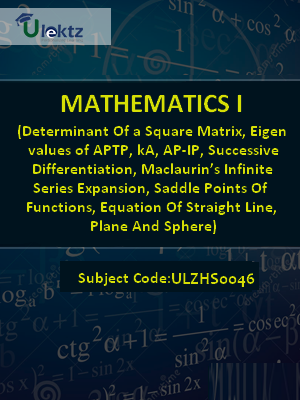 1.3 Rank of a matrix and its determination using elementary row and column operations

1.6 Cayley-Hamilton theorem and its applications

2.1 Successive differentiation: Higher order derivatives of a function of single variable, Leibnitzs theorem (statement only and its application), Problems of the type of recurrence relations in derivatives of different orders and also to find ((yn)0)

2.3 Taylor’s theorem with Lagrange’s and Cauchy’s form of remainders and its application, Expansions of functions by Taylor’s and Maclaurin’s theorem, Maclaurin’s infinite series expansion of the functions: sin x, cos x ,ex, log(1+x), (a+x)n, n being an integer or a fraction (assuming that the remainder Rn →0 as n → ∞ in each case)

3.1 Introduction to functions of several variables with examples, Knowledge of limit and continuity

3.5 Maxima, minima and saddle points of functions and related problems